All unpowered HOT SPOTS and MICRO SPOTS have a 16 ohm impedance and, like most professional-type speakers, have jacks which are wired in parallel (meaning the signal can travel into one jack and out of the other). Think of each speaker as a “load” added to the amplifier. The greater the number of speakers, the heavier the speaker load. Adding too many speakers can overload the amplifier, causing it to overheat and distort. If the amplifier begins to distort, or if it becomes hot to the touch, disconnect any extra speakers. One easy way to determine the speaker load on the amplifier is to use Ohm’s law, which states: “The total impedance of N speakers in parallel is equal to the reciprocal of the sum of the reciprocals." In equation form:

is the ohm impedance (or ohm rating) for the first speaker,

for the second, and so on, for every speaker in the chain. This equation calculates the total ohm impedance of the speaker system, which should NOT be lower than the minimum ohm impedance rating of the amplifier.

This equation may be used to calculate the equivalent impedance for additional speakers in two-speaker increments. Determine the impedance of the first two speakers, substitute Z total for Z , and include the next speaker. Repeat the process until all speakers have been included. The result should be the same as with the first method. A word of caution: polarity rules must be observed when connecting multiple speakers. Polarity will not affect the Z, but can affect the quality and volume of the sound. If you are having problems with any of these applications use Galaxy Audio’s CRICKET Polarity and Continuity Test Set to check the polarity of your cables. 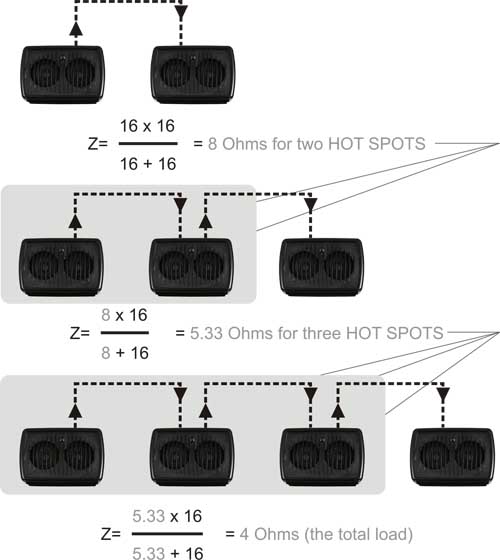