Carson Peters and Iron Mountain is a high-energy, traditional bluegrass band based in the Appalachian Regions of NE Tennessee, SW VA and Eastern NC.  The band is led by Carson Peters, a young music prodigy from Piney Flats, TN.  He has been playing music and entertaining audiences since the ripe old age of 3! Carson has been blessed to make numerous national TV appearances including his latest as guest fiddler for Mr. Ricky Skaggs during the 52nd Annual CMA Awards.  Carson is blessed to get to tour the US and Canada entertaining audiences with his band IRON MOUNTAIN; an awesome group of Christian musicians that he also calls his best buddies.  The band consist of Eric and Ben Marshall from Mt. Airy NC, Austin Tate from Marion VA and Carson’s father Jamie Peters.  Carson and the band love to play bluegrass, bluegrass gospel and “grassed-up” vintage country. Their love for God and playing music is a contagious atmosphere and brings smiles to their fans and audiences.

CARSON PETERS started playing the fiddle at the ripe old age of 3 when his parents bought him a 1/8 size fiddle.  By age 4, he was playing in fiddle competitions and jamming at musical festivals.  Carson has continued to hone the fiddling and singing talents that God has so graciously blessed him with and has won many competitions along the way.  At 12 years old, Carson is a seasoned performer playing numerous venues with his band throughout the region; Bristol Rhythm and Roots, Dollywood’s Bluegrass and BBQ, Asheville’s Bluegrass First Class, Song of the Mountains, Carter Family Fold and WDVX’s World Class Bluegrass concert series to name a few.  Carson has also had the honor of playing on national TV as a guest on NBC’s The Tonight Show with Jay Leno, Little Big Shots with Steve Harvey, as well as play with Jimmy Fortune on the floor of the Tennessee State Senate.  On March 28, 2014, Carson’s dream of playing on the Grand Ole Opry stage was realized when he was invited by Ricky Skaggs to come perform with him and his band, Kentucky Thunder.  In May of the same year, Carson was asked to make a reappearance at the Opry, but this time with his own band.  On July 31, 2014, Carson made his Ryman Auditorium debut playing again with Ricky Skaggs during the 2014 Bluegrass Nights series.  Since these appearances, Carson and his band have performed numerous occasions on the Opry Show.

Carson says that winning trophies and getting your name in the paper is “really cool” but that is not the main reason he works so hard at his music.  “It’s all about using the talent God gave me to make people smile!”  Carson truly loves entertaining people!

He lives in Piney Flats, Tennessee with his parents, Jamie and Robin.  When he is not “fiddlin’ around,” he is just an ordinary country boy who enjoys baseball, basketball, golf, hunting, riding his four wheeler and going to church.

ERIC MARSHALL, who plays banjo, was born and raised in Mount Airy, North Carolina, and has loved to sing from his earliest memories.  Raised in a region known for its traditional music, it was natural for him to be drawn to bluegrass.  In his early 20’s, Eric started playing banjo with his brother in The Marshall Brothers and Highroad Band.  Over the past 20 years, Eric has worn almost every hat possible in a bluegrass band; from band leader to side musician, but he is best known as a traditional style banjo player, vocalist and songwriter.  In 2010, Eric’s son, Ben, joined him on stage for the first time and started a new path for Eric’s musical journey as a father/son duet where his new name was simply “Ben’s Daddy!”  These days, Eric continues to share his talent and style of bluegrass music as he performs with Iron Mountain.

Going to his first bluegrass festival at 18 months old, BEN MARSHALL truly grew up surrounded by music!  Stories of Ben being held by his father on stage as the elder would play and sing, show how the seed was planted.  Ben first started playing at 8 years old.  He told his dad he wanted to play, so Eric sat Ben on a picnic table at Galax Fiddler’s Convention, stood a bass fiddle up in front of him and there’s been no looking back!  With his God-given talent, Ben quickly became known for flawless timing and taste as an anchor for the music he played.  Once comfortable with playing, Ben started singing lead and harmony; adding to his abilities as a performer.  Soon, Ben started playing with the youth group, Oldgrass, which has received numerous awards and realized vast exposure.  Now 18 years old, Ben continues to share a love for bluegrass and gospel music as he currently plays bass and sings as a member of Iron Mountain.

AUSTIN TATE, from Marion, Virginia, is 20 years old and plays the mandolin and sings for the band.  He began playing music at 8 years old.  His taste in music ranges from classic rock and old country to bluegrass and gospel.  He has played for many local churches, nursing homes and restaurants.  He has had some great opportunities to play music with some amazing bluegrass artists, including the Queen of Bluegrass, Rhonda Vincent.  Off the bluegrass scene, Austin enjoys watching dirt track racing.  Austin says that the most important thing to him is his relationship with God and thanks Him for his ability to play music and blessing him with a wonderful, supportive family.

JAMIE PETERS plays the rhythm guitar in the band and has loved bluegrass music since starting to play guitar at age 8.  After a long break from playing the guitar, his love for pickin’ was reignited when Carson began playing.  Jamie also handles the management of the band, audio tech and drives the bus.  He and Robin, his wife and Carson’s mom, also handle bookings.   In any spare time, Jamie also loves restoring and driving old muscle cars. 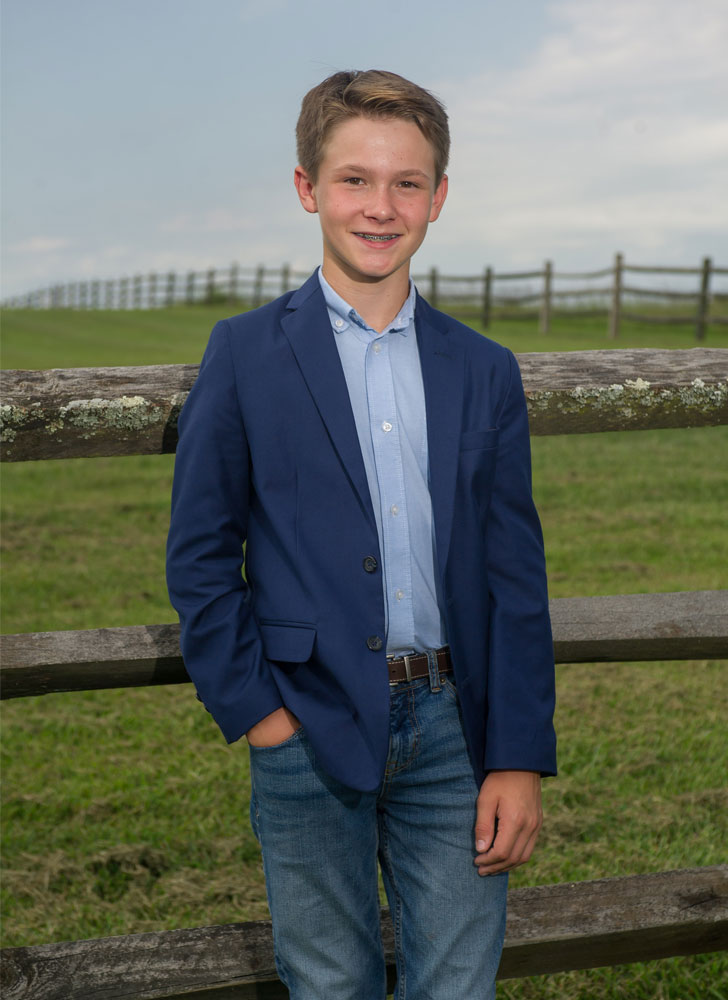 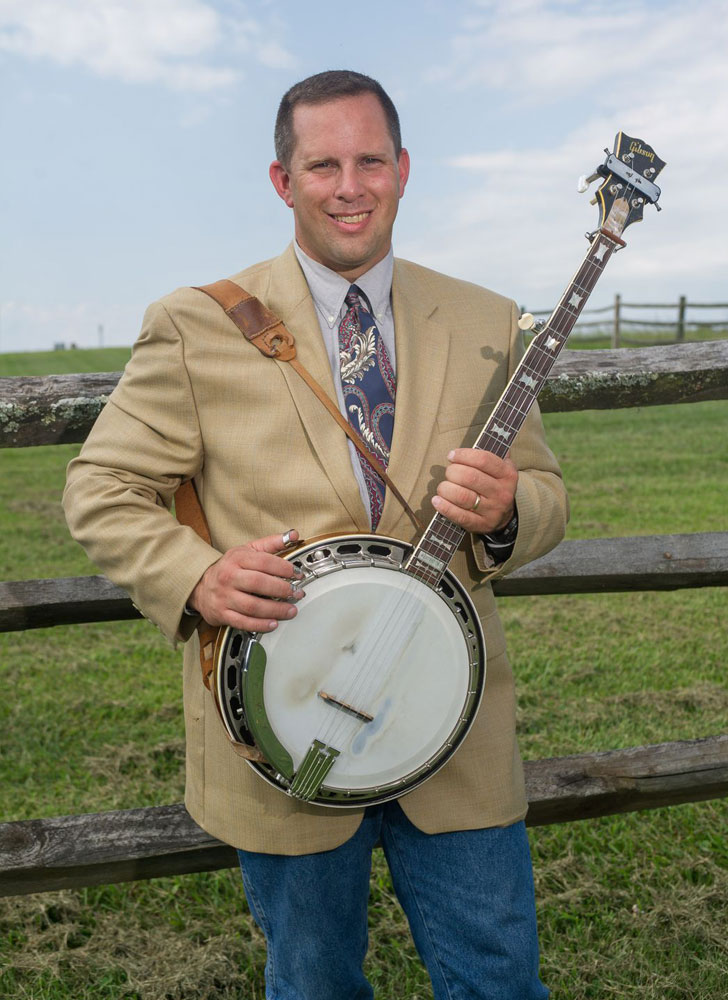 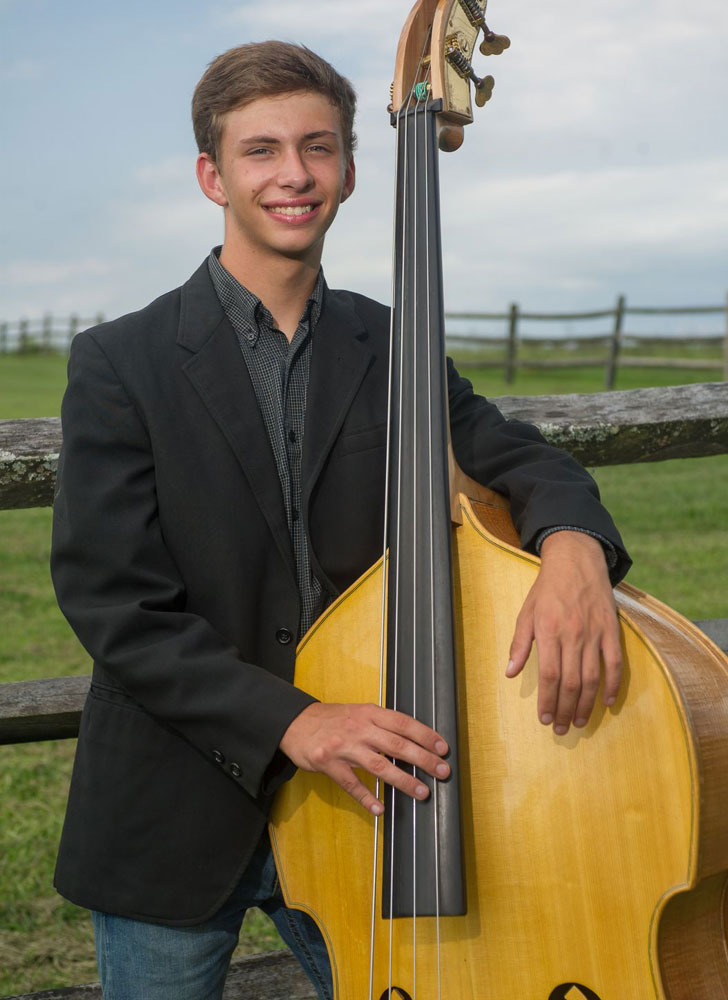 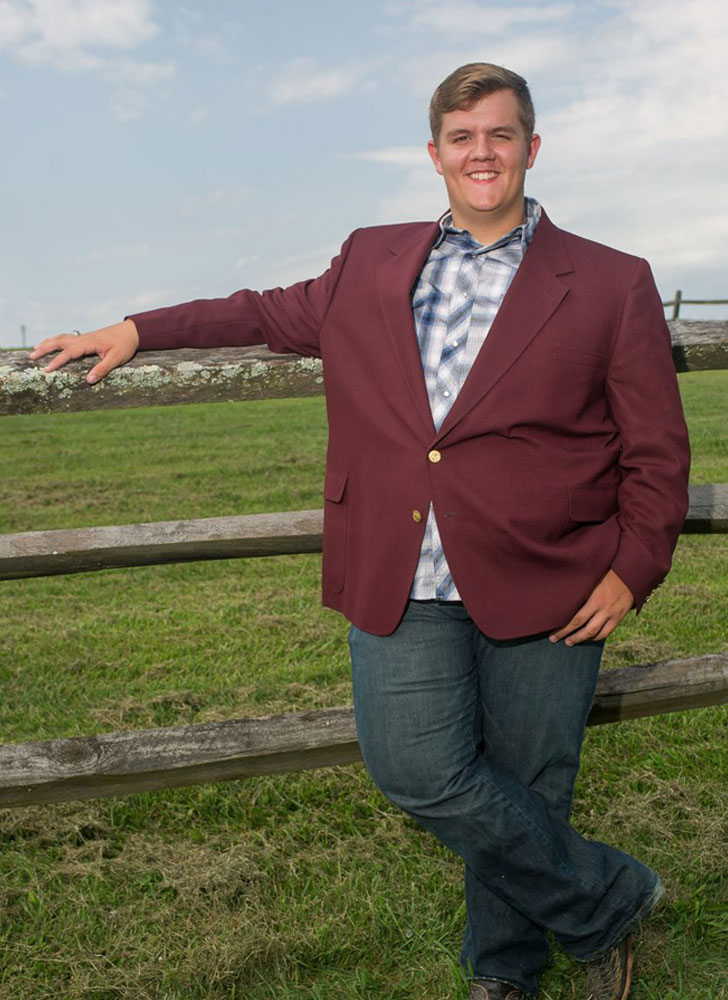 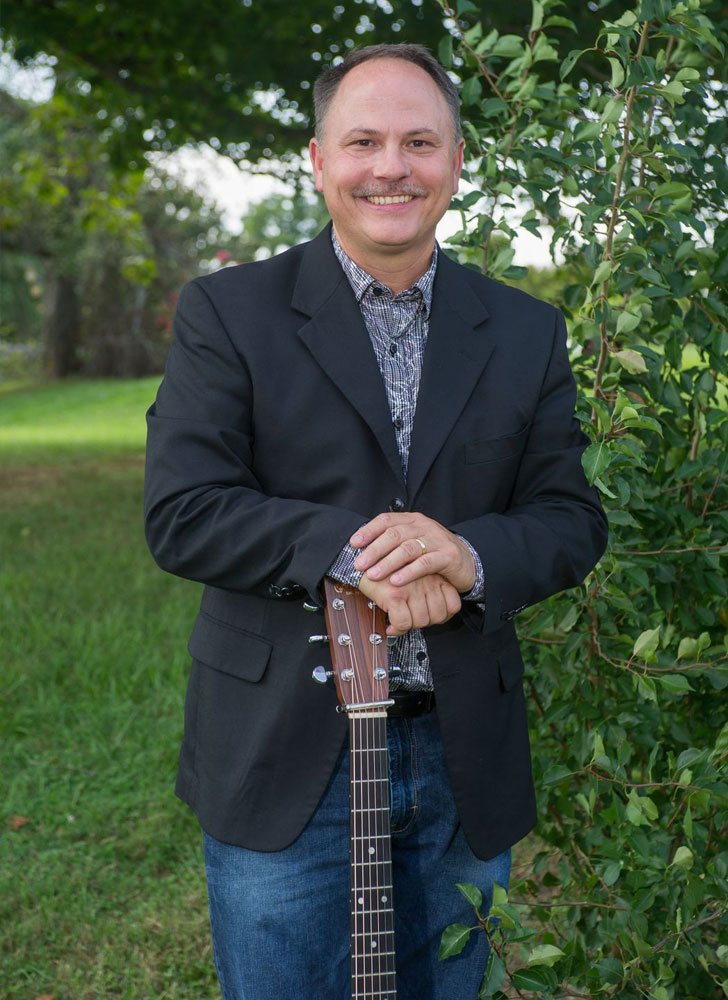 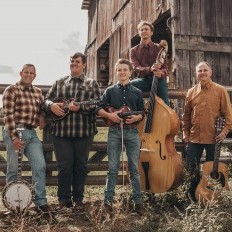 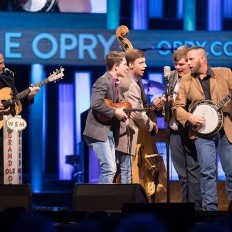 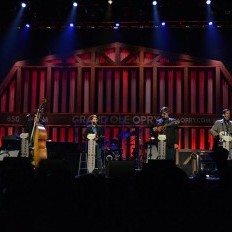